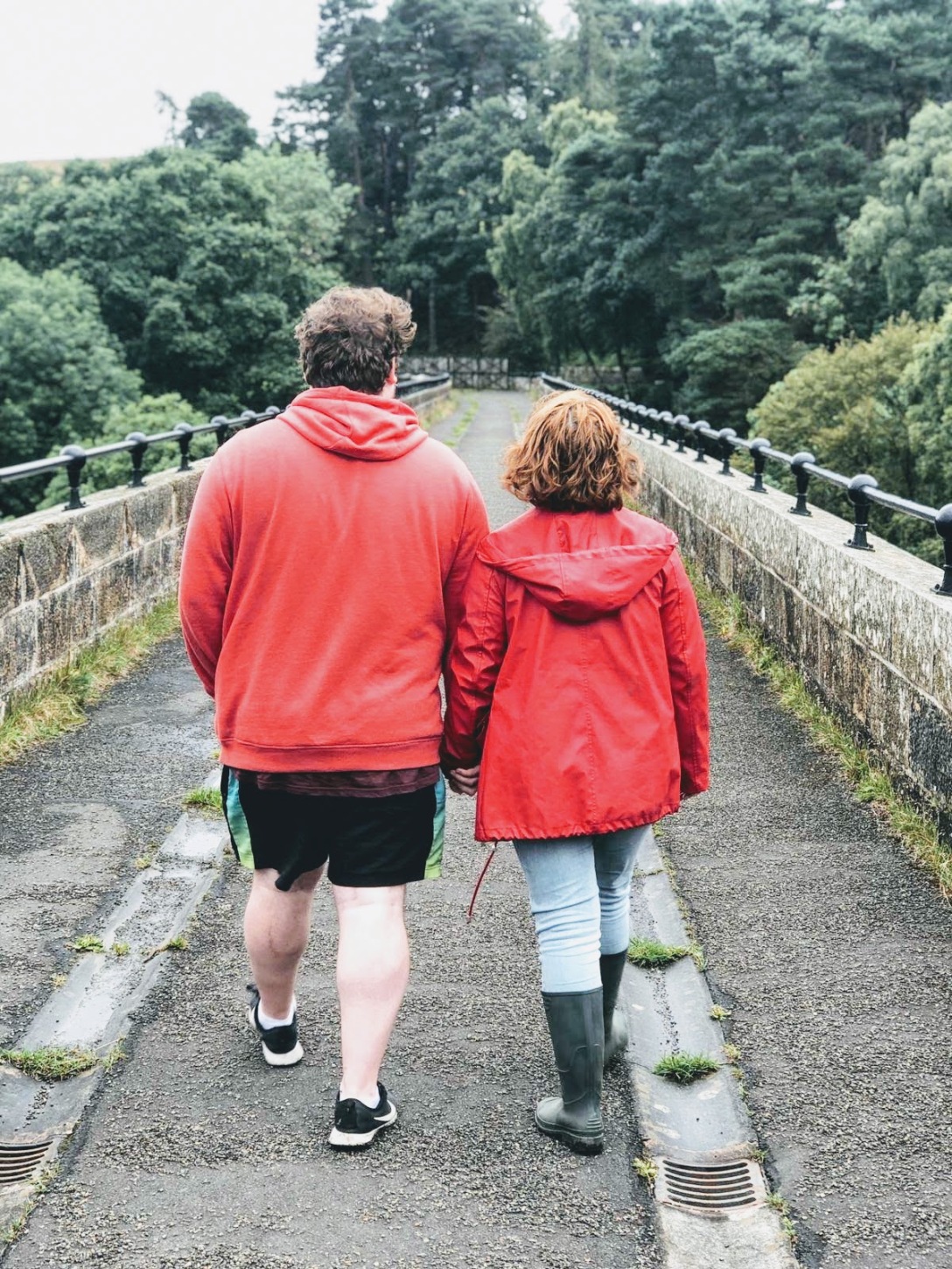 It’s been a long autumn. The last time we posted, Jonathan wrote about what it’s like to support someone with a chronic illness. Well, friends, this is what it’s like. Sometimes we need to take some time out to focus on living life. But, we’re back. Strap in: we’re taking you on a whirlwind tour of the last quarter of our 2019.

August ended with a week in Cumbria visiting my mum. Found just outside of a small village nestled at the northern tip of the Pennines, Mum’s is the ultimate get away. I have always loved this corner of the country. The wild countryside speaks to my inner Jane Eyre or something. The magic, for me, starts as soon as you hit the spectacular views of the Northern Lake District or, if you’re coming from the other direction, the wild Northumbrian Fells with patches of vibrant heather and crumbling stone shepherds huts. Armed with cold drinks, snacks, a cracking playlist, and our good friends Dan and Charlotte, we made the 10(ish) hour journey north.

The week was a wonderful balance of activities and rest. We started with a trip Vindolanda Fort and Museum, to allow Jon to ‘get his geek on’. Dan and Charlotte, as primary teaching graduates, particularly enjoyed the education zone; mum, who joined us for the excursion, was fascinated by examples of Roman citizen’s letters; while Jon, who was probably a viking in a previous life, was mesmerized by the weapons section in the museum. As for myself, I enjoyed Vindolanda for the memories. As a kid, I had come here with my parents and grandparents. I recognized the site for the most part. Vindolanda is a working archaeological site, which means that remains of our ancestors are constantly being uncovered. It’s easy to get turned around when a new bathhouse has appeared…

Mum took her leave after Vindolanda. I, however, decided that my full nostalgia quota had not been filled. So, Jon, Dan, Charlotte and I packed in Jon’s Kia and made our way to Talkin Tarn Country Park – a favorite haunt of the Bounford clan. After the worst game of crazy golf known to man had been attempted in the wooded area, and Charlotte successfully introduced Jon to cheese scones, we set out on a walk around the Tarn.

One of our favourite parts of the whole trip was our brief stop at the Edinburgh Fringe Festival. Hannah had been the previous year and raved about it ever since. So when we decided to head up north in August we decided it was a must.

So off to a wet and windy Edinburgh we headed. Armed with tickets for one show and arriving 5 hours early we decided to have a wander round and take in the atmosphere. there is something special about Edinburgh at the best of times, but during the Fringe things go up a notch. Street performers, music and totally bonkers people on every corner. Fair to say it’s a special time.

Realising we still had a few hours left before the show, we decided to go to the box office to see if we could buy tickets for something with limited funds. We stumbled across a great comedian from New Zealand, Guy Montgomery. His stand up show was all about things you have done in the past which don’t represent who you are now. The best part was when he got to the audience to write down examples of this. we learned that Hannah once convinced her younger brother to do a forward roll off a climbing frame (leading to a cracked head); Charlotte laughed at her friend who fell off her bike (this got read out); Dan used to sit in front of the radiator before school trying to get himself so hot he could pretend to be ill and not go to school, ironically he is now a teacher; and I used to slip Foam bananas into my brother’s pick and mix at the cinema knowing they went straight through him and would make him go to the toilet. Fair to say it was a fantastic show and we are all ashamed of our past.

The one show we knew we definitely wanted to see was Shitfaced Shakespeare (sorry for the language mum). What on earth is Shitfaced Shakespeare you ask? Well take a group of classically trained actors all specialising in Shakespeare productions and get them to draw straws to see which member will spend the day drinking. Fair to say it is quite the potent mix. The day we saw it the, lets call him the “Victim” had been drinking Beer and various spirits all day, and then had to go out and perform the part of “Malcolm” in Macbeth. We saw it all from giddy giggling, nearly falling off the stage numerous times, very heavily adapted lines and endless laughs. We all absolutely loved it and would recommend.

Just like that our Edinburgh adventure was over and we started the long drive back. We will be heading back for sure.

September was a harder month. We had an appointment with Hannah’s new specialist at St Richards hospital in Chichester. This was the first time I (Jon) had been with Hannah at one of these appointments and it had been a long time since Hannah had been to a specialist appointment. Hannah and myself were asked a lot of questions about symptoms, behavior, medication and other normal health questions. The big thing to come out of that appointment was around the subject of Hannah’s face tightenings (which we spoke about in the last blog). We had previously been told that these were symptomatic of her epilepsy but didn’t fall under the seizure category. However, in this appointment we were told that these were actually partial seizures; meaning Hannah was no longer seizure free. As you can imagine, this was devastating for Hannah and myself to hear. This lead to the specialist slightly increase her medication. Hannah was also asked to undertake a few tests over the next few months.

It’s strange when a re-diagnosis comes in. I remember when I was diagnosed with epilepsy, at 16 years old, that I was more focused on the fact that I hadn’t got a brain tumor to focus on the fact that my life was changing. Now, seven years later, I sat in the neurologists office absolutely devastated that I’ve still been having partial seizures. It feels like a classic one step forward, two steps back situation. Here’s the thing, nothing has changed but the terminology of my condition. But that terminology change means I still can’t drive, I need to go up on medication, and I’m not actually seizure free as we thought.

The one good thing to come out of it all? Sleeping through Jonathan’s snoring has trained me to doze in MRI machines with great ease.

I GRADUATED! Over a year after handing in my final piece of work, I attended the Graduation ceremony at Chichester Cathedral. It was a fantastic day, full of black swish-y robes and smiles. As one of the first to arrive at the Cathedral, I spent a full half hour walking around the grounds pretending to be a character from Harry Potter. I am not ashamed.

The thing is, I spent so long pretending to be a Weasley (the best wizarding family. No argument) that I forgot to check the Graduation programme. I found my seat, reunited with a course mate (the two other graduates from our course were sadly unable to attend), and started listening to the opening speech before I checked whether my phone was on silent mode. One text in the Gath family group chat flashed on my screen. ‘I don’t think she knows and it’s going to be fantastic’ … what?

Turns out my name is in the 2019 Graduation Programme under award winners. That’s right, I can now officially say that you’re reading quality content, because you lot are reading the words of an award-winning writer. The Valerie Briginshaw Prize for Dance Writing and Academic Excellence.

I’m glad I found out then and not just before getting on stage. I’m not sure swearing in a Cathedral would be proper for a Master’s Graduate.

As for November and the beginning of December, we’ve both been hard at work. I started working at a cafe along side my Sports Therapy Role and we’re gearing up to a break over Christmas. This is going to be my first Pinford Christmas!

We try to keep you guys updated as much as possible, but sometimes life has to be lived in the moment and the responsibilities of being an adult get in the way of the things we like doing – like this! Don’t worry, we’re not done Blogging, more coming your way soon.

Published by Hannah and Jon

View all posts by Hannah and Jon